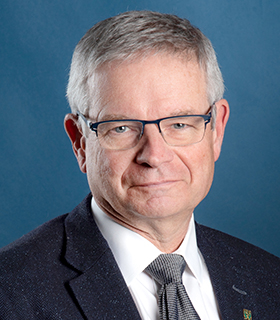 Dr. M. Christopher Wallace received his medical degree from Queen's, residency in neurosurgery (University of Toronto) and fellowships at the universities of Western Ontario and Glasgow.

He was a full-time faculty member at the University of Toronto from 1988-2011. Dr. Wallace has held numerous positions: rank of professor, head of the division of neurosurgery at the University Health Network, program director (neurosurgery), director Toronto Western Research Institute, and the Fondation Baxter & Alma Ricard Chair in Cerebrovascular Neurosurgery. Dr. Wallace “returned” to Queen’s in 2011, joining as head of the division of neurosurgery, focusing on recruitment and the development of a research program.

Dr. Wallace is well known and most passionate about residency education. Dr. Wallace retired from clinical practice on June 30, 2020, and is in his 9th and final year on CMPA Council.