Although the focus in obstetrics is primarily on antepartum and intrapartum management, serious complications can occur in the postpartum period. These complications usually manifest after the woman has been discharged from hospital, and some, such as infections and postpartum hemorrhage, may require readmission.1, 2 What are some of the contributing factors in these cases, and how can maternal postpartum care be improved? 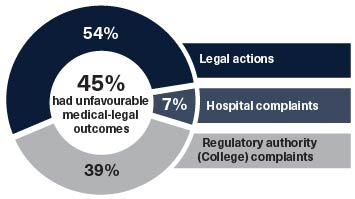 The CMPA reviewed 87 closed medical-legal cases that occurred over a 10-year period3 and were associated with postpartum issues after discharge from hospital. Just over half of the cases were legal actions (54%), followed by regulatory authority (College) complaints (39%) and hospital complaints (7%).

The main issues identified in this review were related to: diagnosing and managing complications, usually infections and sepsis; secondary postpartum hemorrhage (PPH); and retained vaginal sponges. About half of the cases (45%) had unfavourable medical-legal outcomes. Peer experts identified deficiencies in both the pre- and post-discharge care.

In a few cases, the obstetrical team failed to recognize and respond to changes in the mother’s condition before discharge from hospital, missing the symptoms and signs of sepsis or preeclampsia. These patients were usually readmitted within 1 to 3 days. In the preeclampsia cases, the physician did not closely monitor the patient or follow up on test results (e.g. urine protein). In the sepsis cases, nurses failed to verify the patient’s vital signs before discharge or notify the physician when they were abnormal (e.g. hypotension, tachycardia), whereas the physician failed to investigate possible causes of abnormal signs.

Many physicians, including emergency physicians, family physicians (FP), and obstetricians failed to appreciate the significance of a patient’s repeated visits for worsening symptoms. In some cases this contributed to a delay in diagnosis. Once the complication was diagnosed, patients often required readmission to hospital, surgical intervention, and at times, intensive care.

Most postpartum infections were associated with perineal repair after vaginal delivery or with wound infection or endometritis after Caesarian section. In many cases, peer experts opined that infection was a recognized complication of the procedure and concluded that the care met the standard. In other cases, however, the patient experienced a delay in diagnosis and treatment, which resulted in increased morbidity. Identified causes of delays included the failure to consult in a timely manner, and failure to consider more worrisome causes for a presumed wound infection that had not responded to standard antibiotic treatment.

In 6 cases of sepsis following vaginal delivery, the patients presented to the emergency department (ED) within 14 days of discharge. Four patients died from related complications. In 2 of the 4 fatal cases, abnormal test results were missed, either because they were not available at the time of assessment, or because there was no system in place in the ED to follow up on abnormal results.

The following case illustrates the challenges in recognizing sepsis in the postpartum period.

Two weeks after a forceps-assisted delivery, a woman in her early thirties presents to the ED with a 2-day history of constant abdominal pain and nausea. She is tachycardic, but afebrile. The ED physician notes lower abdominal quadrant tenderness on examination. He observes abnormal vaginal discharge and obtains vaginal and cervical cultures. The patient receives IV fluid bolus, an antiemetic and analgesic, and starts taking oral antibiotics for probable endometritis. The patient refuses overnight admission for observation, as she is breastfeeding, and hospital policies do not permit the baby to room in with her. She is discharged home at midnight and advised to return the next morning for re-evaluation and ultrasound. She is also instructed to return earlier if her condition worsens.

The patient returns 5 hours later with increased abdominal pain and hypotension. An abdominal exam reveals rebound tenderness. The ED physician orders blood cultures and other bloodwork, as well as IV antibiotics. Despite the administration of IV fluid boluses, the patient remains hypotensive. The ED physician consults gynecology. Given the patient’s rapid deterioration, she is transferred to a larger centre. The intensivist assesses the patient who is by now exhibiting signs of septic shock on the basis of positive Group A streptococcal cultures. He initiates IV fluid resuscitation, high dose broad-spectrum antibiotics, inotropes, and mechanical ventilation. The patient develops disseminated intravascular coagulation (DIC) and multi-organ failure, and despite aggressive treatment, she dies. A legal action ensues.

What did the experts have to say?

Experts were supportive of the physicians’ care and maintained that the patient’s death was unpredictable and unpreventable. They stated that earlier medical intervention would not have altered the course of the patient's condition or prevented her death.

Secondary (also termed delayed or late) postpartum hemorrhage (PPH) is generally defined as hemorrhage occurring 24 hours to 6 weeks after delivery. In the 13 reviewed CMPA cases related to secondary PPH, most women presented to the ED, their FP, or obstetrician with persistent or increasing vaginal bleeding between 1 to 6 weeks post-hospital discharge. The cause of hemorrhage in these cases was usually due to retained products of conception, or in a few cases, uterine atony. The patients often required dilatation and curettage (D&C), and occasionally, uterine artery embolization.

Peer experts supported the care in the majority of cases. In some cases, the experts identified the physician’s delay in attending at the patient’s bedside as being problematic, along with poor documentation of telephone conversations about the patient’s symptoms and the plan of care.

The patient presents to the ED early in the morning 7 days post-delivery with secondary PPH. The patient’s bleeding and hypotension persist despite the ED physician’s treatment with ergonovate maleate. At around 0430, he telephones the on-call gynecologist at home who makes the erroneous assumption that the patient has received only one dose of the medication, when in fact she has received several doses. The gynecologist recommends IV oxytocin and an ultrasound in the morning. At 0730, the ED physician calls the gynecologist back to attend, as the patient’s bleeding is worse. By now, she is tachycardic, hypotensive, and feeling unwell. The gynecologist states that the oncoming team will see the patient at 0800. The oncoming gynecologist attends at 0815, diagnoses hypovolemic shock, and transfers the patient to ICU. The patient undergoes uterine artery embolization and receives multiple blood transfusions. Fortunately, she makes a full recovery, but submits a College complaint about her care.

What did the College have to say?

The College issued a caution in writing to the gynecologist for not attending the patient immediately, noting the worsening bleeding despite medical treatment, and the ED physician’s request for the consultant’s in-person assessment of the patient. The College also considered the gynecologist’s decision to defer care to the oncoming colleague to be unacceptable.

Unintended retained surgical items, including sponges after vaginal deliveries, are considered "never events"—preventable patient safety incidents that lead to patient harm or death.4, 5 Measures to minimize the occurrence of these never events include the introduction of procedures to perform a sponge count at each birth and the monitoring of provider compliance with policies.6, 7 In some of the CMPA cases involving a retained sponge, the hospital did not have a policy for sponge count after a vaginal delivery; these cases occurred before 2009. Factors that contributed to retained sponges after Caesarean section were the failure to visually or manually inspect the surgical field prior to closure of the incision, and not interpreting an ordered abdominal X-ray before the patient left the operating room.

Based on expert opinions in the cases reviewed, suggested approaches to improve maternal postpartum care include the following: