Is your patient a woman of reproductive age? Consider pregnancy

Published: March 2018 / Revised: August 2018
The information in this article was correct at the time of publishing
18-04-E

Two months after undergoing a breast augmentation, a 38-year-old woman discovers she is 3 months pregnant.

At the pre-operative visit, the plastic surgeon had obtained the patient’s history and conducted a physical examination, but did not ask about the possibility of pregnancy. The intake form also did not ask for this information.

The patient decides to continue the pregnancy. Despite the fact that the baby does not appear to have experienced any negative effects, the patient files a complaint to the medical regulatory authority (College). She alleges that the surgeon should have ordered a pregnancy test before surgery under general anaesthesia.

In this particular case, the College advises the surgeon that a pregnancy test should be routine before any surgical procedure, except emergent, on a woman of reproductive age.

CMPA members have contacted the Association describing cases like the example above, where treating physicians have been unaware that a patient was pregnant before they ordered an intervention or treatment. To get a better understanding of the factors that contribute to these cases, the Association conducted an analysis of its medical-legal files.

What the CMPA’s cases show 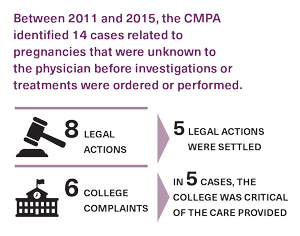 From its medical-legal cases that closed between 2011 and 2015, the CMPA identified 14 cases related to pregnancies that were unknown to the physician before investigations or treatments were ordered or performed. Of the 14 cases, 8 were legal actions and 6 were College complaints. Of the legal actions, 5 were settled, while the College was critical of the care provided in 5 cases.

The majority of physicians involved in these cases were obstetrician-gynecologists and family physicians. Patients ranged in age from 20 to 49 years.

Peer experts who commented on the care in these cases involving undiagnosed pregnancies had the following observations:

Members should call the Association for advice if they have any medical-legal concerns with asking about or determining pregnancy.