Older Canadians have a higher risk of medication-related patient safety incidents than their younger counterparts. This is for a number of complex reasons, including co-morbidities, polypharmacy, metabolic changes, and evolving standards and guidelines.

The CMPA recently reviewed 469 medication-related cases closed between 2013 and 2018 involving patients over the age of 65. Seventy-one percent were complaints or investigations by medical regulatory authorities (Colleges), 22% were legal actions, and 7% were hospital complaints. Close to one-third of cases involved care provided by community-based family physicians, but a wide range of specialties—including internal medicine specialists, surgeons, ophthalmologists, and emergency medicine specialists—were also involved. 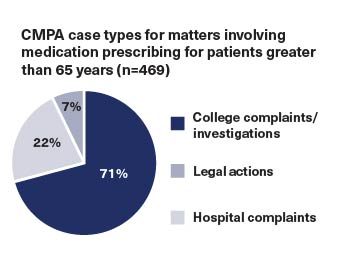 The majority of these cases concerned drugs that were given orally. The most common types of drugs were: opioids; anti-depressant and anxiolytic medications; anti-thrombotics; cardiovascular drugs; drugs given for the treatment of cancer, including chemotherapeutic agents and steroids; and non-steroidal anti-inflammatory drugs (NSAIDs).

The two most common concerns identified by peer experts1 were not fully appreciating the complexity of a patient’s condition when prescribing a new medication, and failing to re-evaluate a patient’s existing prescriptions when clinical circumstances warranted. Communication challenges, including breakdowns in communication between patients and physicians and at handover between providers, also factored into many cases. This article explores common difficulties that may be experienced by CMPA members when managing the medications of their older patients.

An 85-year-old woman with mild cognitive impairment undergoes an uneventful endoscopy for upper gastrointestinal complaints under intravenous sedation. At admission, the gastroenterologist had ordered oxazepam to be given nightly during the patient’s hospitalization, since she had been anxious about the procedure. The next day, a hospitalist assumes the patient’s care, continuing all drugs ordered by the gastroenterologist and adding an order for lorazepam as required because the patient continued to experience anxiety. The patient breaks her hip from a fall getting out of her hospital bed the following morning, after having been given both lorazepam and oxazepam the evening before. A hospitalist peer expert consulted as part of the ensuing legal action is critical of both physicians, stating that both prescribed drugs were inappropriate for this patient, who was frail and assessed to be at high risk for a fall.

Because older patients often have a number of health conditions, they are frequently prescribed multiple medications, making them particularly vulnerable to drug interactions.

Multiple conditions also mean more contraindications and precautions with respect to dosages and monitoring. Sometimes the age or frailty of a patient can itself necessitate greater vigilance when prescribing. For example, older patients may be more susceptible to adverse effects from medications, such as dizziness or drowsiness, leading to an increased risk of falls. Therefore, some medications may need to be started at a lower dosage or require increased monitoring. Consulting with a pharmacist or geriatrician may help to identify older patients who are at higher risk.

A survey of community-dwelling Canadian seniors found that 71% would be willing to stop a medication if their physician said it was possible.2

In addition to selecting a potentially contraindicated drug or dosage, inappropriate prescribing to older patients may include the continuation of unnecessary or potentially harmful prescriptions. Age-related changes may affect a drug's absorption, distribution, metabolism, and elimination, making a drug no longer necessary or even harmful, which underscores the importance of regular reviews. Furthermore, in some cases an existing therapy, even if well tolerated by the patient, may no longer represent the standard of care in this age group, requiring re-assessment and a change of therapy.

Polypharmacy is a well-recognized phenomenon in the older population.3 A recent CIHI report found that 1 in 4 Canadians age 65 and older were prescribed 10 or more drug classes,4 highlighting the scope of this problem and its challenges for clinicians.

Accordingly, identifying and deprescribing potentially unnecessary medications for patients over the age of 65 is a growing area of focus for patient safety. This practice is seen as particularly important for older seniors and those living in long-term care facilities. Resources such as the STOPP/START criteria for potentially inappropriate prescribing in older people5 or the Beers Criteria6 can be used to guide prescribing to older patients in addition to clinical judgement. Deprescribing guidelines2 and protocols for discontinuing potentially unnecessary or inappropriate medications, including over-the-counter medications, can further help physicians manage the complex medication needs of their older patients. Physicians should review relevant updates to guidelines when re-evaluating medications and use caution when planning to discontinue medications. Pharmacists can play an important role by conducting regular medication reviews, working with older adults to reduce medication errors, and assisting with deprescribing.

A woman who is 75 years old sees her family physician for a routine visit. After reviewing the patient’s medications, the family physician decides to switch the nitrazepam that the patient is taking as a sleep aid to a non-benzodiazepine hypnotic without tapering, telling her that benzodiazepines may be harmful, and giving the patient the impression that nitrazepam was no longer available for him to prescribe. After being treated in the emergency department for withdrawal symptoms, the patient seeks out another physician who prescribes nitrazepam. In response to the patient’s complaint, the College cautions the family physician on the importance of careful tapering of benzodiazepines and is critical of the miscommunication around the availability of the drug and the lack of clarity around the rationale given for deprescribing.

Communication was a recurring theme in medication-related cases involving patients over 65. Breakdowns in communication occurred at various points in the process of care, including in the context of medication reconciliation—which is particularly important when multiple providers, and possibly family members, are involved in the patient’s care—or when there were transfers between facilities. This highlights the importance of engaging patients, their caregivers, and pharmacists in comprehensive medication reviews when appropriate.

Medication adherence can also be an issue for older patients. Poor adherence can have many causes, including cognitive decline and the “pill burden” that can come with taking multiple medications. Therefore, extra time and care may be needed to explain a medication’s indication, monitoring requirements, adverse effects, and any special precautions. These precautions may include the timing of medications and possible interactions or contraindications with over-the-counter medications and supplements. Patient education materials and support from pharmacists can reinforce adherence and support proper use of medications, including advice on the timing of medications as well as tailoring dosages to reduce pill burden. Additionally, aids such as the use of dosette boxes and blister packs can facilitate adherence.

Ensuring open and appropriate communication with family members involved in the patient’s care can be challenging, and many of the cases reviewed involved complaints from caregivers when the rationale for treatment decisions was not clearly explained or when a substitute decision-maker was not appropriately consulted about changes to the care plan.

Explaining the need and rationale for deprescribing can be particularly challenging. Therefore, using educational resources for patients and families, and partnering with a pharmacist may be helpful.

Inappropriate prescribing to, and communication with, older patients are growing safety concerns given the potential for harm in this large and increasing segment of the population.

Special considerations should be considered when prescribing for this age group. For instance, the continuation of medications should be re-evaluated on a regular basis as patients age and their clinical circumstances change. Clear communication with patients, their caregivers, and other involved health professionals plays an important role in ensuring safe care while managing the medication needs of older patients.