Skip to Navigation Skip to Content
Home Advice & Publications Browse articles Legal and regulatory proceedings When multiple defendants are involved in a legal action, things can get complicated

When multiple defendants are involved in a legal action, things can get complicated

Published: May 2017
The information in this article was correct at the time of publishing
17-10-E

In the course of their professional lives, some physicians may be named as a defendant in a civil action related to medical care provided to a patient. A civil action involves the resolution of a dispute between two or more parties through the court system. A lawsuit starts with a statement of claim, called a writ in some provinces or a demande introductive d'instance in Québec.

In civil cases, courts can award damages to plaintiffs who have proven their claims on a balance of probabilities. Generally speaking, the plaintiff (patient/or representative) in a medical malpractice case must prove that the defendant(s) breached their duty of care or obligation to the plaintiff by providing care that fell below the standard expected in the circumstances, and that the breach caused the plaintiff’s injuries.

Litigation typically entails a patient initiating an action against a physician, alleging negligence or fault in the care. Variations to this scenario can, however, result in more complex litigation involving multiple parties and claims.

A plaintiff may, for example, commence an action against several defendants, such as a physician, hospital, and other healthcare professionals employed by the hospital. The action may become more complex if crossclaims or third-party claims are subsequently added to the action, or if a party is later added or substituted. These processes typically expand the number of claims and potential defendants in an action, may raise complicated legal issues, and significantly prolong the resolution of a dispute. 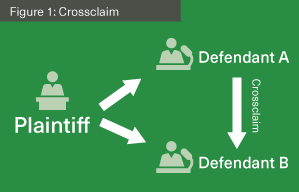 As illustrated in Figure 1, a crossclaim is a claim brought by a defendant (Defendant A) in an action against a co-defendant. This type of claim, which is available in provinces and territories other than Québec (the same type of debate is permitted in Québec through other procedural ways), is typically intended to raise allegations that a co-defendant (Defendant B) is liable for the plaintiff’s claim. The crossclaim may be included in Defendant A’s statement of defence to the original action. It is usually necessary to advance a crossclaim early in the action, generally before all of the facts are known.

A crossclaim is based on the legal principle of “joint and several liability,” which allows a plaintiff to pursue any one defendant for the full amount of the plaintiff’s damages, irrespective of the degree of fault of each defendant. Defendant A’s crossclaim will typically assert a claim for “contribution and indemnity” against Defendant B in the event that damages are awarded against Defendant A in the main action.

In CMPA cases, crossclaims usually occur when a CMPA member and a hospital or other healthcare professionals are named as defendants in an action. Upon reviewing the medical records and investigating the merits of the plaintiff’s claims, a defendant may decide that the other named defendants are responsible for the damages suffered by the patient and may initiate a crossclaim against them for contribution and indemnity. 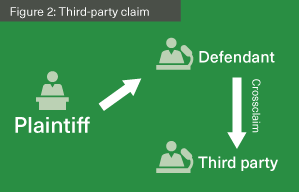 Third-party claims may arise in CMPA files in a number of ways. For example, an action is brought against a nurse and hospital, and those defendants in turn commence a third-party claim against a CMPA member who was not named by the plaintiff in the original action. In another example, a CMPA member and hospital are sued for injuries suffered by the plaintiff as a result of using a medical device or taking a drug, and a third-party action is later brought by those defendants against the manufacturer of the device or drug where there is evidence that the injuries were caused by negligence on the part of the manufacturer.

Medical malpractice actions are often initiated before all of the facts are known, all of the medical records are received, or all the expert opinions are obtained. Consequently, when the action is filed the plaintiff may not know the identity of certain potential defendants or have a complete picture of their role in the events in question.

In these circumstances, the plaintiff may commence the action, but name a defendant whose identity must still be ascertained as “John (or Jane) Doe.” Once the identity of John/Jane Doe is determined at a later time, the plaintiff must usually seek the court’s permission to substitute the named individual (Defendant B) for “Jane Doe” in their statement of claim.

A plaintiff may also commence an action against a defendant or defendants, but may later learn of another individual whom the plaintiff believes might also be responsible for the injuries (Defendant C). In that case, the plaintiff will usually be required to ask the court for permission to add Defendant C to the ongoing action.

Adding or substituting parties usually arises in CMPA cases involving treatment in a multidisciplinary or hospital setting. Due to the number of healthcare professionals who may have provided care to the plaintiff, it may not be readily apparent at the time the claim is commenced which individuals were involved in the relevant events that allegedly led to the plaintiff’s injuries.

Limitation periods, or “prescriptions” in Québec, determine the period of time in which plaintiffs must commence a legal action; these are established by provincial and territorial statutes. A plaintiff is unable to bring an action after the limitation period has expired (i.e. the claim is “statute-barred”).

Limitations statutes typically establish separate limitation periods for crossclaims, third-party claims, and motions to add or substitute a party. The purpose is to clarify when those claims become statute-barred, as compared to the initial proceedings to which they are associated.

For example, Ontario's Limitations Act, 2002 states that where a limitation period against a person has expired, a plaintiff cannot pursue an action against that person by having them added as a defendant to an existing proceeding. In addition, the limitation period that applies to third-party claims and crossclaims is deemed to commence when the defendant in the main action is served with the plaintiff’s statement of claim.1

The legal process for civil actions can become particularly complex when multiple defendants and claims are involved. The rules of civil procedure in all Canadian jurisdictions provide mechanisms to debate issues between defendants already named in an action, and third-party claims to be commenced when a defendant wishes to claim against someone not already named in the action. CMPA members involved in these more complicated actions are encouraged to discuss the impacts of multiple defendants and claims with their legal counsel.